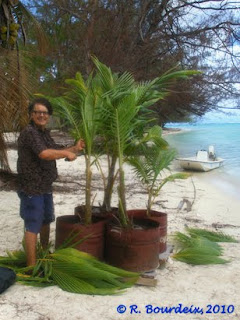 In June 2009, the company Beachcomber SA and the family of the late actor Marlon Brando gave their agreement to integrate the atoll of Tetiaroa in a project of conservation of coconut varieties from Polynesia.
Practically, four to five small islands or peninsula, will each be replanted with a single variety.
Thanks to the geographic isolation of these places, coconuts palms will breed only between palms of the same variety, allowing conservation, production and dissemination of certified seednuts. Four or five varieties of coconut palm will be then preserved on Tetiaroa.

In April 2010, although no funding was dedicated to this activity by the local government, the first plantings of the conservatoire began on Tetiaroa. Seednuts of the horned coconut variety were planted a a small motu of Tetiaroa. For more information on the horned coconut palm, please visit our Tetiaroa blog here.
This work was indeed not easy, because the coconut trees were planted in half barrels of metal; the bottom of the rusted barrels was pierced by the roots of the coconut palm, making it difficult to impossible for manual unloading of coconuts. This allowed us to realize the extreme strength of the roots of the coconut palm, which play an important role in the fight against coastal erosion.

So we had to bring out the heavy artillery: we banged the drums using a machine pallet forks. Coconut seedlings were then "stripped": the reduction of leaf area limits the evapotranspiration and facilitates recovery. Then they were transported by boat on a stormy sea, to the place of planting. 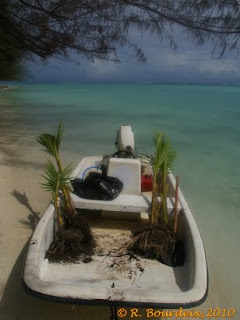 It was decided not to publicly disclose the exact location of this plantation, to limit the risk of theft of this extremely rare material. There are currently on this motu a few coconut trees that will be gradually destroyed when the newly planted horned coconuts will come into production.
In order to create a new population of coconut palms of the conservatoire, we generally recommend selecting twenty to fifty coconuts from the same parental variety. Then, two to four descendants of each parent are planted in a geographically isolated place. The relatively high number of parents limit the rate of inbreeding in subsequent generations. This avoids generating crosses between relatives, causing deleterious effects and a consequent reduction in vigor and fruit production.
Given the extreme rarity of horned coconut palms, it will not be possible to find twenty parents showing the required characteristics. For now, only a dozen of horned coconut palms have been reported in French Polynesia. We recommend getting seed from at least four different palms, so as to limit the deleterious crossovers between relatives in the next generations.

Contacts have been made to get horned seednuts from Raiatea and Tahaa. We recommended to continue harvesting seednuts from the horned coconut palm growing on Tetiaroa. The resident biologist Nicolas Leclerc (on pictures) told us that all the coconut produced by this palm does not have horn; fruits with coconuts horns are sometimes stolen by some workers who take them back as souvenirs. We emphasized that the hornless fruits of the horned coconut palms could also be germinated. Around the fruit, which bears the stuffing horns, is a tissue of maternal origin only. The absence or presence of horns shall not affect on the genetic nature of the embryo of the seed. A hornless coconut seed from the horned coconut palm could give a horned palm, just as likely a horned coconut seedlings (phew!). To avoid confusion and promote self-fertilization, it is better to remove all the inflorescences and fruits of the five or six palms that surround the horned one. Thus all seednuts collected at the foot of the horned coconut will sure originate from this tree.
﻿﻿
﻿﻿
Because of cross pollination habit of the coconut palm, seednuts harvested on the horned coconut palms will not give all horned coconut palms. Thus, then the progeny will fruit in the motu, it will be necessary to perform a selection among the palms, and to eliminate some of the hornless. Anyway, the genes will be preserved, even if they do not speak to one hundred percent. In future generations, we will come gradually to form a population where all individuals will bear horns. 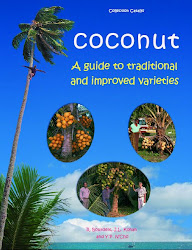